Sermons are, by definition, narratives and as such, they have plots. At the same time, the sermon is not a story. While similar in many ways, narratives and stories are distinct. Therefore, to think of narrative preaching as merely one of many homiletical styles is to misunderstand and reduce the nature of the sermon. The sermon is more than just an option for the preacher; rather, it is, by definition, a narrative because it happens in time, not in space.

In light of this revelation, what are new strategic aims for sermon preparation and delivery? 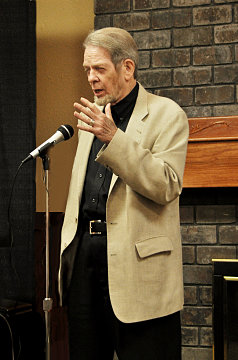 Rev. Dr. Eugene L. Lowry served as professor of preaching for over 30 years at Saint Paul School of Theology in Kansas City, MO. Now that he is no longer actively serving as the William K. McElvaney Professor of Preaching, his travels as preacher, teacher and pianist have broadened in scope.

He was Senior Scholar in Residence at Drew University Theological School fall 2003 and fall 2004; in the spring of 1999 he was aguest professor at Princeton Theological Seminary. Lowry has been featured in the Great Preachers series on the Odyssey Television Channel. He delivered the 2009 Lyman Beecher Lectures on Preaching at Yale Divinity School and the 2011 William L. Self Lectureship on preaching at McAfee Theological Seminary. These lectures form the basis for this book.

Through the years he has preached in hundreds of churches, conferences and regional events in over 20 denominations as well as lecturing in 50 graduate theological seminaries across North America.

His writings include six books on narrative preaching and over twenty journal articles and book chapters on preaching, worship, Biblical study, educational philosophy and creativity. His keyboard lecture/concerts relating jazz and Christianity have resulted in four recordings in the blues/jazz mode.

How to Preach a Parable

Dancing the Edge of Mystery