Life in the twenty-first century presents a disturbing reality. Otherness, the simple fact of being different in some way, has come to be defined as in and of itself evil. Miroslav Volf contends that if the healing word of the gospel is to be heard today, Christian theology must find ways of speaking that address the hatred of the other. Is there any hope of embracing our enemies? Of opening the door to reconciliation? Reaching back to the New Testament metaphor of salvation as reconciliation, Volf proposes the idea of embrace as a theological response to the problem of exclusion.

Increasingly we see that exclusion has become the primary sin, skewing our perceptions of reality and causing us to react out of fear and anger to all those who are not within our (ever-narrowing) circle. In light of this, Christians must learn that salvation comes, not only as we are reconciled to God, and not only as we "learn to live with one another," but as we take the dangerous and costly step of opening ourselves to the other, of enfolding him or her in the same embrace with which we have been enfolded by God.

Volf won the 2002 Louisville Grawemeyer Award in Religion for the first edition of his book, Exclusion & Embrace: A Theological Exploration of Identity, Otherness, and Reconciliation (Abingdon, 1996). In that first edition, professor Volf, a Croatian by birth, analyzed the civil war and “ethnic cleansing” in the former Yugoslavia, and he readily found other examples of cultural, ethnic, and racial conflict to illustrate his points. Since September 11, 2001, and the subsequent epidemic of terror and massive refugee suffering throughout the world, Volf revised Exclusion and Embrace to account for the evolving dynamics of inter-ethnic and international strife. 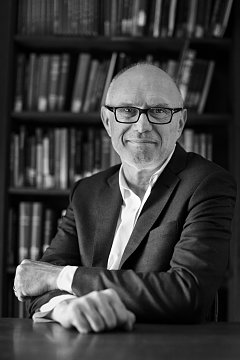 Miroslav Volf is the Henry B. Wright Professor of Theology at Yale Divinity School and the Founder and Director of the Yale Center for Faith and Culture.  He was educated in his native Croatia, the United States, and Germany, earning doctoral and post-doctoral degrees (with highest honors) from the University of Tübingen, Germany. He has written or edited more than 20 books and over 100 scholarly articles. His most significant books include Exclusion and Embrace (1996), winner of the Grawemeyer Award in Religion, and one of Christianity Today’s 100 most important religious books of the 20th century; Flourishing: Why We Need Religion in a Globalized World (2016) and (with Matthew Croasmun) For the Life of the World: Theology that Makes a Difference (2019).